Elephant In My Pajamas

by Edge of Reality 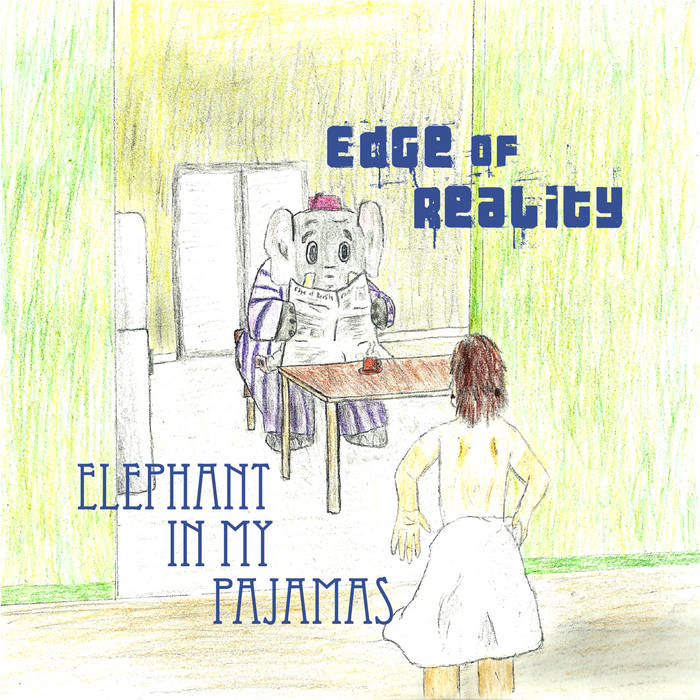 Sven B. Schreiber So this is what Joey Frevola did before releasing his awesome solo album "Gone"... and without doubt, the term "awesome" is applicable here, too. This album - the official debut album by "Edge of Reality" - is full of sparkling ideas, always on the run from attempts of classification. It's mostly instrumental, except for "Fragon", and if it accidentally comes anywhere close to a well-defined genre, it's probably "fusion". Nevermind, one thing is sure: The album's fun factor is at least as high as its suprise capability. Favorite track: Tickle Fight.

Edge of Reality is an eclectic art metal band based in Nashville, TN that embodies a wide variety of influences and expresses both light-hearted narrative and thought-provoking concepts. They aim to inspire, to entertain, and to confuse through said influences, narrative, and concepts. ... more

Track Name: Forks and Spoons Pt. 1
Joey: How about spoons?

Jon: What do you want to talk about with spoons?

Joey: Well spoons, you see, they're shaped in such a way that you can scoop things, and I find that to be...

Jon:Well yeah, but, I mean, come on, when you get liquids they're just suddenly useless. Why would you even bother with a spoon?

Joey: I think you have spoon mixed up with a fork.

Jon: What are you talking about?

Joey: See, forks are the ones with the little ridges in them. Where they have like ridges.

Jon: So you're telling me basically that this entire time I've had forks and spoons mixed up?

Jon: You're gonna tell me "a knife" aren't you? I know what you're thinking. "It's a knife." But no, It can't be a knife. Think about it. Because a knife can't scoop up anything.

Joey: That's true, you've got me stumped on this one, Jon.

Jon: Butter and cream cheese. I mean, that's the best you'll get.

Joey: Yeah, I mean, you could theoretically use butter and cream cheese with either a spoon, fork, or knife if you're creative with it. Honestly, You just flip around the spoon and fork and use the handle and you've basically got a knife that's not sharp.

Dragon born is sailing all across the sea / flying high above the wind to find Alduin / Sovngarde awaits far from home / He is the only one / Away from dragon's reach through unexpected lands / A portal into the afterlife / A foggy mist surrounds the DovahkIin / This is the end / Fus ro dah!!!!!!!!

Part 2: He has returned to us / Back from his victory / All hail / Praise the Dovahkiin / We're saved / Finally free and we praise the dovahkiin / Skyrim's people have finally won / Tamriel beckons our dragon's glory / We praise Talos for the one / Who saved us all / The Dovahkiin

Part 3: He is here / He's back from the fight / He's slain the dragon by his might / We're safe, we're free from that tyranny / All hail dragon born, the Dovahkiin ://

Part 4: I have returned from Sovngarde / From the land of the dead and the glorified / With companions and champions of Skyrim / I have slain Alduin once and for all / All that was lost shall not be in vain / Tamriel becons of dragon's glory / With the mind of Talos, we've been set free / For all of eternity / Sovngarde waits

Bandcamp Daily  your guide to the world of Bandcamp

Featuring Oakland sounds from the Smart Bomb collective and Samplelov.